IN THE WORKSHOP OF… MARJOLEIN DALLINGA FELT ART AT ITS BEST 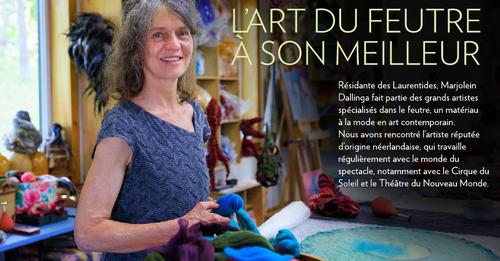 An article by journalist ÉRIC CLÉMENT, LA PRESSE, Montreal Quebec to consult below:

IN THE WORKSHOP OF… MARJOLEIN DALLINGA

FELT ART AT ITS BEST

Resident of the Laurentians, Marjolein Dallinga is one of the great artists specializing in felt, a fashionable material in contemporary art. We met the renowned artist of Dutch origin, who works regularly with the entertainment world, notably with Cirque du Soleil and the Théâtre du Nouveau Monde.

Born in the Netherlands, Marjolein Dallinga learned to sew when she was young. Having noticed her predispositions, her parents sent her, every weekend, to an art school, from the age of 8. Later, she studied art history and fine arts. After meeting her Quebec spouse in Paris, she moved to Montreal in 1989. “I started making papier-mâché jewelry that I sold at the boutique at the Museum of Fine Arts,” she says. It provided me with money for my paintings. »

Marjolein Dallinga learned the basics of felting thanks to a sheep breeder from Saint-Faustin. “She had demonstrated by making a small felt ball. I then bought wool and started, as an autodidact, 26 years ago. I had a baby. I made felt toys for her, because I couldn’t paint with a baby next to me anymore. »

Since then, she has developed her art so well that the circus, theater and cinema have required her services. She has created hangings, costumes, scarves, gloves, hats and handbags. But the man of theater and costume designer François Barbeau (died in 2016) persuaded her to embark on contemporary art. It was decisive. She now exhibits in museums in Europe and the United States, and has acquired a fine international reputation. One of his creations was awarded at the World of WearableArt (WOW), in New Zealand.

Felt is an older material than woven fabric. “In all the countries where you see sheep, there is a felt tradition,” says Marjolein Dallinga. At the Hermitage Museum in Russia, felt works date back to 300 BC. »

To create her felt, Marjolein Dallinga works, by hand, quality European wool, Spanish merino or sheep from the Alps. She dyes it and transforms it by applying layers of fibers that she moistens with soapy water. She crosses them and presses them constantly so that the fibers get entangled and amalgamate. Its fibers of several colors give beautifully chamoired felts.

“I have to roll the material, massage it, throw it. It is a very soft art, but also physical, especially when the felt pieces are very large. Felt is like skin. Very intimate, it protects, envelops and allows you to express something that comes from within. I sometimes dream that I am between the layers of felt! »

Marjolein Dallinga loves to teach. Her expertise being recognized, she teaches and gives conferences everywhere: Ireland, Chile, Oregon, Uruguay next November, France and the Netherlands in 2023.

The art of felting has taken off since the 1990s. “We started to have better wools, she says. This helped to develop the quality of the felt. Before, it was mostly portable things that we created. More contemporary artists are starting to create with felt. Last spring, the Bradley Ertaskiran gallery exhibited felt paintings by American artist Melissa Joseph.

ARTS AND BEING section, screen 10

This text from La Presse+ is a copy in web format. Consult it for free in an interactive version in the La Presse+ app.